Finally, after three misses, I made it to the ballpark for a game! Which means that this entry is accompanied by a couple of bad photos.  Like this one of the players lined up being all national-anthemy:

And this one of the super exciting Giants-Dodgers rivalry giveaway pin: 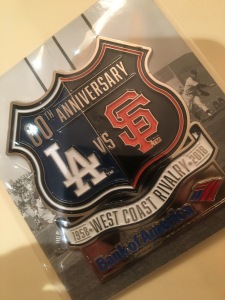 And it was a satisfying game right up until the 10th inning. Here’s your 100-words-or-less game report:

This was another classic Giants-Dodgers duel. It was evenly balanced at 0-0 until the top of the 4th. Then the Dodgers scored off a Kemp line drive. They clung to that one run lead until the Giants saw their Kemp and raised them a Buster. Posey’s line drive put a run on the board for the home team. At the bottom of the 9th, the score was still 1-1. Fans girded themselves for extra innings. We were trained and ready from the night before. Alas – only one more inning was needed. The Dodgers scored off a Farmer line drive. Ouch.

After Friday’s night’s game and fireworks were rained out (only the sixth time  game has been rained out in the history of the team), I was super excited about finally making it to the ballpark and seeing Saturday’s game. Unfortunately, after my Friday night flight back to San Francisco was cancelled (due to the same rain that stopped the ballgame), I managed to miss my flight back on Saturday morning, Fortunately, inflight wi-fi meant I could listen to it on mlb.com during the flight. Then the KNBR broadcast got me through luggage retrieval and the taxi ride home. What I didn’t expect was that the game would keep going and going (and going) for so long that I also got an hour of relaxing on the sofa enjoying the closing stages. And they are what take up most of today’s 100-words-or-less game report:

After nine innings of entertaining baseball,  the score was 4-4. It went to extra innings. Five of them.

At the top of the 14th, Puig hit a home run. Giants fans begin to whimper at memories of 2017. Then this happened….

With runners on first and third, McCutcheon came to the plate. He took a curveball strike. Then a ball. Then swung at a fastball. Seven fouls and another ball later, he had. Wilmer Font’s repertoire etched into his brain. He connected with the next pitch. The ball sailed over the fence.

Once again, I had tickets to attend the game. Once again, workload triumphed and the game turned out to be a KNBR background distraction. And what a happy distraction this one was! Here, with pleasure, is your 100-words-or-less game report:

Cueto pitches. Great hair. Great shimmy. No sign of blisters. He only gives up one run. And also this happened:

First run walked in. Second run scored on a wild pitch. Can this game get any better? Third run scored on a Crawford sacrifice fly. Then…. Hernandez homers! Belt homers! Sandoval homers (three runs score)! Crawford homers!  Belt’s single so Hundley scores feels like an anticlimax. The bullpen didn’t suck and didn’t give up any runs.

Giants score as many home runs in this game as they did in entire 2018 season (please don’t fact check this).

It was the Home Opener. I had been booked months ago to work that day. Cursing my poor calendar management, I consoled myself with the thought that the Mariners should be easy beats. I could surreptitiously watch the game unfold on Gameday. I’d get a burst of happy chemicals with each run further ahead the Giants went. Sadly, it didn’t go quite as planned. Here’s your hundred words or less game report, as watched on sentence-long iPhone alerts…

It’s April Fool’s day. I spent the first 15 minutes after tonight’s game kind of hoping ESPN would flash up a big “April Fool!” sign. The commentary team would laugh uproariously and confess that we’d all just watched a completely made up game, staged by a bunch of Giants and Dodgers lookalikes. They’d explain that the real game had happened earlier in the day. The Giants won 1-0. Joe Panik scored a home run. Christ Stratton pitched seven scoreless innings. The bullpen didn’t let in any runs. Hunter Strickland closed it out. That didn’t happen. So here is your kind of depressing 100 words or less game report:

First, Chris Stratton pitched three scoreless innings. Then he nearly hit Kyle Farmer with a pitch. So he tried again, and successfully hit him with a pitch. That seemed to rile up the Dodgers. They scored one run in the 4th as a warm-up. Then scored four in the 6th. Then added another four (that they really didn’t need) in the 8th. Tch! Meanwhile, the Giants stranded six men on base. Their bullpen sucked and gave up six runs. Yikes!

It wasn’t all bad though. Buster hit a double in the 6th. Then he stole third. Yay Buster.

It was all looking so good. The Giants were cruising toward a shut-out series against the Dodgers. They were breaking all sorts of start-of-the-season records. And then tonight happened. Here’s your 100-words or less game report:

Imagine we live in a parallel universe where ball games are won by the team with the most runners left on base and the most errors. In that world, the Giants kicked the Dodger’s baseball-panted butts tonight. They out-hit their nemeses 9 to 4, and won the errors count 3 to 0. Sadly, they didn’t actually get any runs, and the Dodgers scored five, so they lost the game. However, in a positive cut and paste from last night’s report, the bullpen didn’t suck and didn’t give up any runs. And Derek Holland’s pitching was better than the score suggests.

Well, tonight’s 100-words or less game report may be the easiest I’ll ever write. In fact, I’ve just copied and pasted yesterday’s and made a couple of edits:

Facing their long-time nemeses in the  second game of the season, THE GIANTS WON (this is the only piece of this game report you really need to read).  Johnny Cueto pitched what looked for a while like it was going to be a perfect game, until it wasn’t. . Joe Panik hit a solo home run. The rest of the Giant’s offence made  Kenley Jansen look vincible. The bullpen didn’t suck and didn’t give up any runs. Hunter Strickland successfully closed and didn’t threaten to punch anyone.  An excellent start to the season.

Today’s game was watched surreptitiously on MLB’s Game Day app between work meetings. Two air-punches were successfully turned into arm stretches without anyone seeming to notice. Here’s your 100-word or less game report:

Facing their long-time nemeses in the opening game of the season, THE GIANTS WON (this is the only piece of this game report you really need to read). Ty Blach pitched much better than his stats say he should. He does that against the Dodgers. Joe Panik hit a solo home run. The rest of the Giant’s offence made Clayton Kershaw look vincible. The bullpen didn’t suck and didn’t give up any runs. Hunter Strickland successfully closed and didn’t threaten to punch anyone.  An excellent start to the season.

I suddenly realized that a little context may be helpful for future readers of this blog (just in case anyone ever reads it and is interested enough to wonder why things are as they are).

The purpose of this blog is not to repeat the news of the mainstream sports media. Its focus will be on some of the lesser known aspects of Giants baseball, baseball in general, history of baseball, people who like baseball, food to eat while watching baseball, baseball clothing, baseball swag, baseball-shaped clouds, and the relationship of squirrels to baseball.

However, I don’t want to minimize the importance of the actual games, so I will be writing a game report for every game of the 2018 season — in less than 100 words.

So if you want more detailed game stats, visit mlb.com.

And if you want to read more in-depth game reports, I enjoy the writing over at the McCovey Chronicles or The Bleacher Report.

I discovered baseball in 2013. And since then, the way I perceive calendar time has changed. Once up a time, I used to think of the year being divided into months. Or occasionally seasons. Now my year has two distinct chunks — Baseball Season and Not-Baseball Season.

In between that, I’ll update this site with some quick educational pieces for newcomers to the world of non-expert baseball, and some predictions for the year to come.

Did you know Spring Training has been around since the 1890s! Read about its history here.

Game Report Uncategorized
Join 1 other subscriber
Follow The View From the High Seats on WordPress.com